Home • Insights • Modern Slavery • Are there slaves in your supply chain?

As stated by Jane Blacklock, responsible sourcing manager at FatFace Ltd, the question is not are there slaves in your supply but rather where are the slaves in your supply chain. This realistic was echoed by many of the speakers at Ardea International’s Modern Slavery awareness event, held in Brighton in mid-March, as they revealed their business-strategies and policies to deal with the growing issue.

First to speak, Jane Blacklock, explained that for large clothing retailers the primary area of vulnerability in their supply chains are the overseas manufacturing sites. Blacklock explained that to assess the individual factories’ standards, FatFace uses a system of audits and focused follow up. The audit reports assess factories and the issues raised result in a grade – either green, amber or red. If a factory is graded as red then it is prioritised for follow up and the company will work with the factory management to solve the issues at hand. Blacklock revealed that this system of assessment and through being prepared to provide the resources and time needed to help the flagged factories improve their standards, 70% of all factories used by FatFace are graded green or amber.

This insight into how clothes retailers are aware of and deal with modern slavery in their supply chains was supported by Lorna Bramwell and Richard Bentley from Single Resource, a leading temporary work recruitment company in the UK. They explained that the company had a clear focus on preventing exploitation by working with consultancy organisations and the Gangmasters & Labour Abuse Authority (GLAA) as well as provide training to all their employees in operations roles in how to spot and deal with suspected cases of slavery. This training and strategy meant that, from November last year, Single Resource has had only 17 identified cases of slavery.

Paul Armstrong, Investigating Officer with the GLAA, gave us an insight into the how the government is trying to combat the modern slavery since the passing of the Modern Slavery Act in 2015. Armstrong explained that the biggest role of the GLAA is to work in partnership with labour providers and users to prevent and remove cases of slavery in the UK. However, it appeared that, due to the small size of the governmental department, having only 40 investigators across the country, the GLAA struggles to keep up with demand and is highly aware that to properly tackle the issue of modern slavery it needs a substantial increase in funding from the government.

The final speaker of the evening was Ardea International’s own Emily Foale who has recently finished and published a report on compliance within the jewellery sector with regards to the Modern Slavery Act. Foale explained that Ardea International had investigated eight leading jewellers in the UK, including Signet Group, Cartier and Tiffany and Co. The report revealed that 50% of the companies researched had not published their slavery statement, something that the Modern Slavery Act made compulsory for companies with a net worth of £36 million or over. This shows that without the government being committed to putting more time and resources into enforcing the new legislation on modern slavery there is very little incentive for companies, whose consumers are not demanding it, to be committed to eradicating cases of slavery in their supply chains. Foale’s full report is called “All that Glitter is Not Gold: Shining a Light on Supply Chain Disclosure in the Jewellery Sector” and is accessible via Ardeainternational.com.

Overall, throughout the event it became clear that to really prevent and eradicate modern slavery in supply chains there must be a conscious and committed effort to providing training, time and resources to the issue, as has been shown through the examples of FatFace and Single Resource. Although the passing of the Modern Slavery Act was a significant step in the right direction, the government must invest in departments and organisations like the GLAA that could and should have the resources to follow up with companies and industries, like the jewellery industry, who are not complying with the legislation.

So, where to next? Now that the responsibility for the identification and eradication of slavery in supply chains lies with each business, it seems that many are trying to deal with this universal issue individually. Here at Ardea International we think that an establishment of a community of UK businesses committed to cooperation is the best and most efficient way to eradicate slaves from your supply chain. 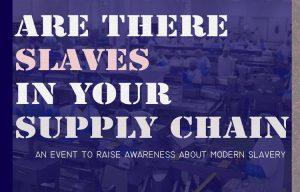 Following on from our successful event in October 2017, we were asked to build an anti slavery hub in Brighton. You are invited to an information and networking session in Brighton to continue the debate and to raise awareness for businesses and the community about modern slavery.

Book now, spaces are limited and tickets will be offered on a first come first serve basis.

There will be time after the event for networking, with refreshments and nibbles.

Alison is a Senior Public Affairs Manager within the Policy & Campaigns team at the Co-op Group. She designed Project Bright Future, the Co-op’s unique employment initiative for victims of Modern Slavery and leads the Co-op’s Modern Slavery campaign. The campaign incorporates advocacy for victims’ rights, awareness raising amongst colleagues, customers and members in addition to Project Bright Future.

The Co-op was recognised for it’s work on Modern Slavery in 2017 when it won the Thomson Reuters ‘Stop Slavery Award’. Alison is a former Head of Public Affairs at eBay UK and recently spent 12 months of secondment at the Department for Education developing a communications strategy on teacher supply.

Lucy has spent over ten years working in Brighton & Hove City Council’s Community Safety Team where she is the lead officer working on Modern Slavery. She is a specialist in the responses of local authorities to international migration.

Prior to that, Lucy worked at the Refugee Council for 10 years.

Tri qualified lawyer and Founder of Ardea International, a niche sustainability, business and human rights consultancy with expertise in modern slavery. Colleen was involved with the Home Office discussions developing the transparency in supply chain provisions in the Modern Slavery Act. She works with business and organisations to address their compliance needs and develop a best practice approach to tackling modern slavery in supply chains. She lectures on the subject and her passion is to see transformed communities, working collaboratively with business and the third sector.

Book now, spaces are limited and tickets will be offered on a first come first serve basis. :https://www.picatic.com/modern-slavery