Home • Insights • Modern Slavery • Exploring how women and girls are most vulnerable to modern slavery, forced labour and child labour.

According to the ILO in 2016, at any given time an estimated 40.3 million people were in modern slavery, including 24.9 million in forced labour and 15.4 million in forced marriage. The 2017 Global Estimates of Modern Slavery focused on forced labour and forced marriages stated that women and girls accounted for more than 99% of victims of forced sexual exploitation and that more than 70% of victims of forced sexual exploitation were in the Asia and Pacific region, followed by Europe and Central Asia (14%),  Africa (8%), the Americas (4%) and the Arab States (1%).

What is modern slavery?

Modern slavery, often know as ‘human trafficking’, is the buying, selling and forced transportation and transfer of human beings. It is illegally taking ownership of another person through violence, coercion, fraud or abduction. Modern slavery can take many forms such as forced domestic servitude, sexual exploitation, forced labour, child labour, forced marriages and many other forms.  The International Labour Organisation reports that modern slavery is the second largest criminal activity in the world and is a $150 billion industry.

Why are women and girls more vulnerable? 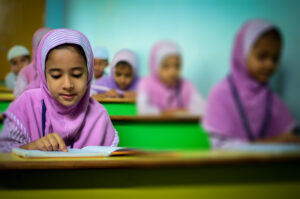 Although modern slavery affects everyone, it is a gendered issue. Women and girls are more vulnerable to this crime.

Research points to the relevance of broader patterns of human rights abuses that disproportionately affect women and girls, including domestic and sexual violence and discriminatory beliefs and practices around access to property, education, and citizenship. Globally, women are more likely than men to live in extreme poverty and to report food insecurity. In turn, this impacts access to education with data revealing those living in poor households have higher rates of illiteracy, and of those, women in poor households are the most disadvantaged of all.

In many countries, fewer girls attend school than boys further leading them to a greater risk of poverty. If girls are not attending school, they are forced to seek work outside the home and are not given any autonomy in choosing what work they will do, where they will work or how they will travel to work. This in turn makes them especially vulnerable to exploitation from recruiters and employers who they believe will help them find work. It is also important to note that women in marginalised groups such as people with disability, LGBTQIA+ or an ethnic minority experience even further risk of modern slavery.

There are many challenges around the world that make women more vulnerable to modern slavery but large contributor is the power imbalance facilited in patriarchal structures. Gender inequality remains a major power imbalance around the globe which stems from cultural practices, laws and historical gender roles.

Of course, slavery does not spare men and boys. Men are more likely than women to be exploited by the state and in many industries such as agriculture, mining, and construction. While a focus on female victims should not come at the expense of male victims, who must also be supported and empowered, an understanding of the gender differences in victimization can shed light on where prevention and victim identification efforts should start.

What can we do to protect women and girls?

Fundamentally, the disproportionate number of girls involved in modern slavery is both a symptom and a cause to great Human Rights violations, thus actions undertaken towards its dismantlement cannot be simply narrowed down to its victims.

This is a global and societal issue, highlighting a serious need for awareness raising and education. Women and girls need to be aware from an early age about the manipulations and tricks established with the aim to trap them into slavery. The most promising technique is the involvement of previous exploited victims providing testimony about their experience.

Additionally, young girls need to be educated about their most essential rights and need to be empowered in order to claim and safeguard them when dealing with a discriminatory situation. Awareness and confidence raising can motivate these girls to challenge the social and cultural norms of their country.

What can businesses do to address this issue? 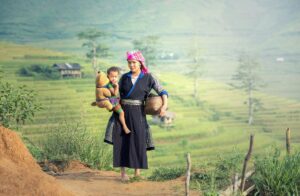