I first had these thoughts back in 2018. They regularly returned to me throughout the course of the year, often while I was out on my bicycle – that’s my thinking time. Then one cold day, in early December, while pedaling along, I had my Eureka moment: raise awareness of modern day slavery by aligning my marketing and communications skillsets with my passion for cycling to undertake a personal challenge that would motivate me towards a cycling world record and perhaps inspire others.

I won’t lie I was apprehensive on several levels. About taking on a challenge: having the time and the commitment to train – it would need to be a sizeable challenge to achieve the objectives; my ability to cycle long distances (at that time I’d never cycled more than 50 miles and never that far on consecutive days). And did I want to put myself in the spotlight? I knew that the very nature of setting a personal challenge that might inspire others would require me to tell my story. 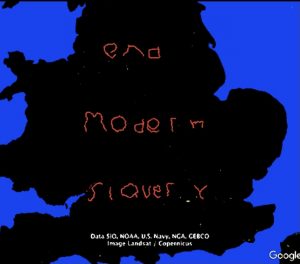 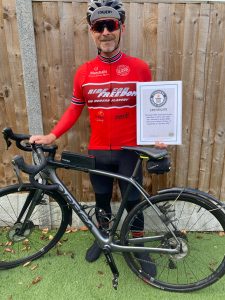 So, I started small. First, I ran my idea – to cycle from London to Manchester in one week, and then from Bristol to London via Cardiff in week 2 – by Andrew Wallis, CEO at Unseen; Ben Cooley CEO at Hope For Justice, and Chris Harrop OBE, at Marshalls Plc. They were very positive. We agreed the challenge would be a fundraiser for the two charities; Marshalls would support where they could too, rally their networks and welcome me en route to their HQ in West Yorkshire for a photo opportunity.

To cut a long story short, I committed and trained, cycling more than 4,000 miles between 1 January 2019 and the start of what became #RideForFreedom2019 on 2 October 2019. I cycled that solo and with several others over 500 miles during the two weeks, raising more than £2,000 for the two charities. I was honoured that Baroness Young of Hornsey OBE met us at the conclusion of the ride outside the Houses of Parliament on 18 October 2019, Anti-Slavery Day.

The engagement too was amazing: I was invited to drop in at the HQ’s of the Rights Lab in Nottingham, Hope for Justice, Unseen and Marshalls. Online, using my comms skillsets, throughout 2019, there were more than 250,000 social media impressions, and several pieces of media coverage including local TV on Live Manchester. I loved the whole experience: the training, the planning, the collaboration, the impact it had, and the two weeks cycling itself. I was hooked!

But what next? I was asked by several people: “How are you going to top that next year?” I knew the idea would come to when I was on my bicycle, and it did: A Guinness World Record attempt! Everyone knows about that, I thought, so if I set an ambitious cycling challenge that somehow includes an anti-modern slavery message and I use again my marcomms skills to promote the attempt, then hopefully it will raise awareness and even inspire others to set their own challenge and create a snowball effect. 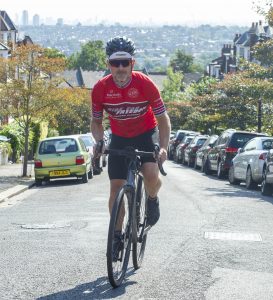 Fast forward to October 2020. I’ve set a new Guinness World Record for the “the largest GPS drawing by bicycle (individual)” by cycling 620.5 miles (998.7kilometres) and spelling ‘end modern slavery’. My 13-day ride, titled #RideForFreedom2020, traversed England on pre-planned GPS routes. Starting on 16 September, I spelt ‘end’ between Manchester and Doncaster. ‘Modern’ took me from Ludlow to Peterborough via Leicestershire. ‘Slavery’ began in Bristol and ended on 2 October in central London.

It was an amazing experience: beautiful (often), tough (sometimes) rewarding (always) and a good balance of days cycling on my own (which I enjoy) and with others. Around 15 others cycled one or more stage with me. It was sunny (25C at its hottest), rainy (torrentially so two days after the 25C day and for the last stage into London), and windy – 40mph gusts and with relentless headwinds on the ‘n’ stage around Peterborough.

My favourite rides were three of the hardest, involving lots of cycling up hills that provided spectacular views over England’s invariably beautiful countryside. One was from Glossop to Sheffield via Woodhead Reservoir to Holme Moss. That’s a climb of 4.5km and a 287 metre-gain to a height of 524 metres above sea level, which was the highest point of the ride. It was a lovely sunny day and as demanding as any I’ve had on a bike but the stunning scenery and sense of achievement made it memorable.

The other special rides were the day I drew the letter ‘m’, starting in Ludlow and ending just outside Kidderminster. The rolling countryside, traditional villages and quiet roads in the Shropshire Hills AONB was simply gorgeous to cycle through, especially so on a beautifully warm and sunny late summer’s day. The other was in the Chilterns, cycling from Henley-on-Thames to Princes Risborough along its pretty tree-lined and dappled lanes.

So far there’s been several articles in the press, including ITV’s Granada News, and more than 1-million impressions on social media. That’s pleasing as it underpins RideForFreedom’s objective to raise awareness of modern slavery; especially as it has reached many who are outside my existing anti-slavery networks. That’s critical if we are to get a real shift in public understanding of the issue and action to bring about change.

On a personal level I’ve improved my health over the last 18 months that encompasses both RideForFreedom2020 and 2019: I’ve lost around five kilos in weight, reduced my cholesterol level, enhanced my confidence (on and off the bike) and the experiences have generally made me more positive and focused both in work and life. I still can’t say I love the spotlight that’s necessary when undertaking a personal challenge to raise awareness of an issue but the more one does it the easier it becomes. 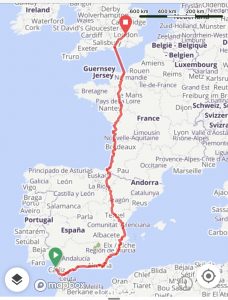 So, now, what next? Through the success of RideForFreedom2020 and 2019, and to raise awareness of modern slavery on an even greater scale, RideForFreedom2021’s cycling challenges include a 2,900 kilometres (1,800 miles) from Cadiz, in southern Spain, via France, to London, between 1-18 October. The route highlights a documented human trafficking route from Africa to the U.K. The ride, called “El Gordo” (translated as “the fat/big one”), will include an attempt to break an existing Guinness World Record by cycling 1,720kms (1,068 miles) in 7 days on a pedal-assisted bicycle. You can read more here.

I am also keen to work with others – individuals and companies – to support you to achieve your objectives, especially if these involve delivering positive social impact on anti-slavery initiatives. So much the better if they involve cycling and goal setting (your own Guinness World Record?) too. Get in touch to discuss your ideas. Lastly, look out for news of a pilot programme, Freewheel that aims to empower survivors of modern slavery to cycle, provide them with road awareness/proficiency training and basic mechanical bike skills.

For further information about any or all of the above, contact Gordon