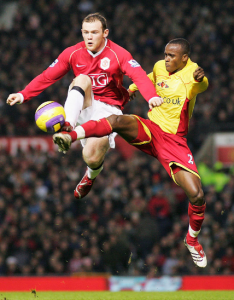 In recent years safeguarding has been recognised as a key responsibility for sports organisations, but modern slavery has yet to be fully acknowledged as a safeguarding concern. The money in professional sport means that organised criminal gangs see it as an opportunity to exploit athletes for financial gain.

Traffickers promised Alhassan Al Bangura that he would get a trial at a professional European club. Instead, when he arrived in London from Sierra Leone he was locked in a hotel and sexually assaulted. Luckily, Al Bangura escaped and went on to become a professional player for Watford FC. He said that “thousands of young boys, many aspiring to be footballers, are sold a dream, which ends in a nightmare. I still hear stories like mine from back home”.

Instances of modern slavery have also been identified in the use of third party suppliers such as contracted cleaning and security services. There is an urgent need to raise awareness and integrate measures against modern slavery into current safeguarding policies to limit these risks.

How does modern slavery fit into safeguarding policies?

The global standard for safeguarding in sport is defined by the 8 priorities laid out in a 2016 report led by Unicef UK. This report highlights that organisations need to develop clear policies so that new recruits to the organisation understand their safeguarding responsibilities.

Training for modern slavery risk needs to be included as an element of basic safeguarding instruction. Companies are encouraged to regularly review and update their modern slavery statements and safeguarding policy. A colleague trained to mitigate the risks of modern slavery within an organisation can help to keep you up to date with developments across sport.

What are the reporting mechanisms in football?

Reporting is crucial in combatting modern slavery risk and represents a basic duty of care. Victims of modern slavery should be given the opportunity to access support from the local authority or charities like the Red Cross and the Salvation Army. Once the safeguarding officer is aware of trafficking risk, then this referral process will be significantly more reliable.

What training is available?

Sports organisations must urgently address the need for training on modern slavery. Ardea International is running a 6 week online pilot training programme for the sports sector on combatting modern slavery risk, starting on 21st of May.The training and support programme consists of 6 e-learning modules of 30 minutes each, a workbook, and an online classroom session that is an hour long each week. It also includes case studies, templates, checklists and one to one support. There is also an online forum for developing networking with participants from the course and previous courses.

If you register this week, there is still time to join our ENDslavery training and support programme pilot for the sports sector.